Two years after the UK recession ended in the final quarter of 2009, came a decrease in GDP in the final quarter of 2011 and the first quarter of 2012, signifying an official “double dip” recession. This Update looks at key labour market indicators since the beginning of the recession period in 2008. It presents the latest national and London figures of those claiming Jobseekers’ Allowance (JSA), known as the claimant count, and also shows the official unemployment measure: the International Labour Organisation (ILO) definition, which is derived from the Labour Force Survey. It gives some detail on the geography and characteristics of those looking for work. In addition, it gives figures for employment levels. 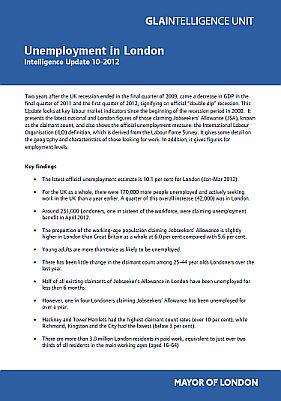