The general fertility rate (GFR) is the number of live births per 1,000 women aged 15-44. Rates are based on the most up-to-date population estimates.

The Total Fertility Rate (TFR) is the average number of live children that a group of women would bear if they experienced the age-specific fertility rates of the calendar year in question throughout their childbearing lifespan.

The TFR has been calculated using the number of live births and the 2006 mid-year population estimates (sub-nationally) and the 2006-based 2007 projections (nationally) for women by single year of age. This generally produces a better match of births to those at risk of having births. However, local authority level population estimates are only considered reliable in five-year age bands. Thus, especially in small local authorities, it should be noted that rates computed using single year of age data may produce spurious results.

City of London has been grouped with Hackney after 2004.

A Google Docs Motion chart showing Total Fertility Rates (1982 - 2009p) for London Boroughs is available. There are 3 charting options, bubbles, bar and line. Click on the bar tab. On the colour menu, choose TFR. The play button is located at the bottom left hand of the chart. 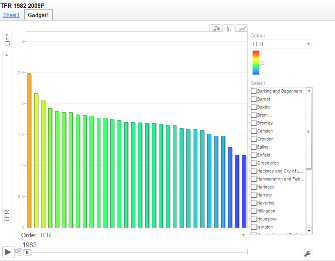